Birds. I heard birds in the city centre for the first time as I woke on day two of the quarantine here. Not just the odd caw that we hear off our balcony when the pigeons are preparing for the day or coming home to roost on the abandoned building opposite, but a full symphony of birds making their morning calls to each other. It was beautiful.

Anyone who has ever been to Andalucía will know that one thing you cannot get away from here is the noise. It’s not bad noise, but a low level hum and thrum of life; of animated conversations, traffic, shutters going up and down, glasses and plates clinking in bars, the odd moto piercing your ears, children and dogs. A cacophony of life. It’s both reassuring, you certainly don’t feel alone here, and also overwhelming, especially at times like Easter or Feria when most of the city is in the street at all hours. We live in the centre of this city and sometimes it grates but it’s a small price to pay to live a really good life.

The absence of noise on that first morning after quarantine began was both peaceful and surreal. Andalucía is its people; the warmth and life of the city; an unstoppable energy that goes to bed at 2am and can get up again at 7am. I’m often in awe of people’s stamina and the insatiable need to be with other people outside; in bars, cafés, terraces, parks – life here is lived outdoors.

So, taking the majority of people off the street over these last nine days – the absence of noise is noticeable and has added a lovely peace to the quarantine. But there are moments. Moments for people to express themselves outside – on our balconies at 8pm we all go out to applaud the workers that cannot stay at home. It is jubilant. I’ve seen neighbours in the surrounding flats who I’ve never met but now smile and wave at every evening.  Living in a city is sociable but you tend to have ‘your’ places, the café or bar for breakfast, the fruit shop, market, the neighbours in your building, the bar below you; it’s possible to be greeting people all day here. Yet, all those faces on the balconies are unfamiliar to me. I’ve been wondering if we’ll recognise each other in the street after all this (if we’re lucky enough to make it that far.)

The atmosphere has also been subdued. We’re all scared and unsure. But slowly an untameable spirit is coming back – the applause at 8pm  has got longer each day followed by emotional shouts of ¡Viva! and ¡Viva España! There is solidarity. A sense of being in it together. Today I heard friends shouting from the street to a balcony; there was joy in those words; the jaleo and buzz won’t be away for long.

But what about the silence? I have heard owls at night too and this morning a blackbird was perched on the terrace singing. It hypnotised me for a few minutes – I’ve never seen one on the balcony before; in the park yes but not in the city. And that is what’s happening in so many places – nature is taking steps towards us. An entire flock of geese waddled across the Arenal bridge today and were uploaded to social media. We hear the canals in Venice are clearing. What other beauty is there to come from our absence? How long will it take for the concrete to start greening and will anyone really want to stop it?

It feels like a wonderful secret; that although for the terrible reasons we are at home –  the wilderness is coming back and it doesn’t take long. Can we bear it? To take a moment to breathe in and know that we are not separate from this in the same way that we are not separate from each other? Can we turn towards it knowing what we have done, knowing it isn’t looking to forgive us, simply to envelop us in the net of symbiosis that we have opted out of.

Will we remember to listen in stillness to the birds when we go outside again? 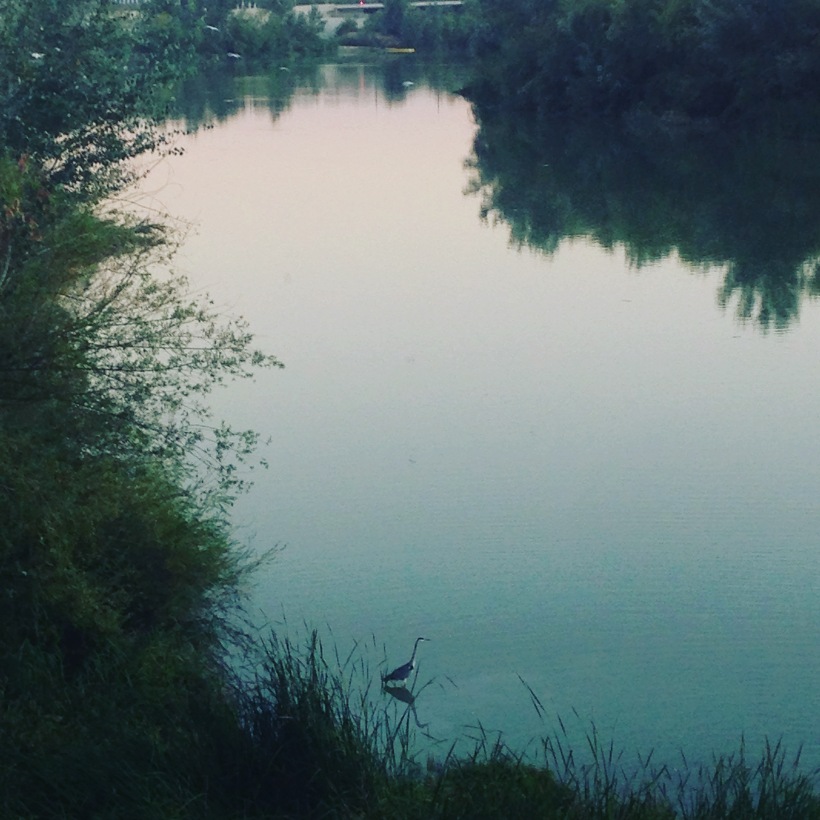 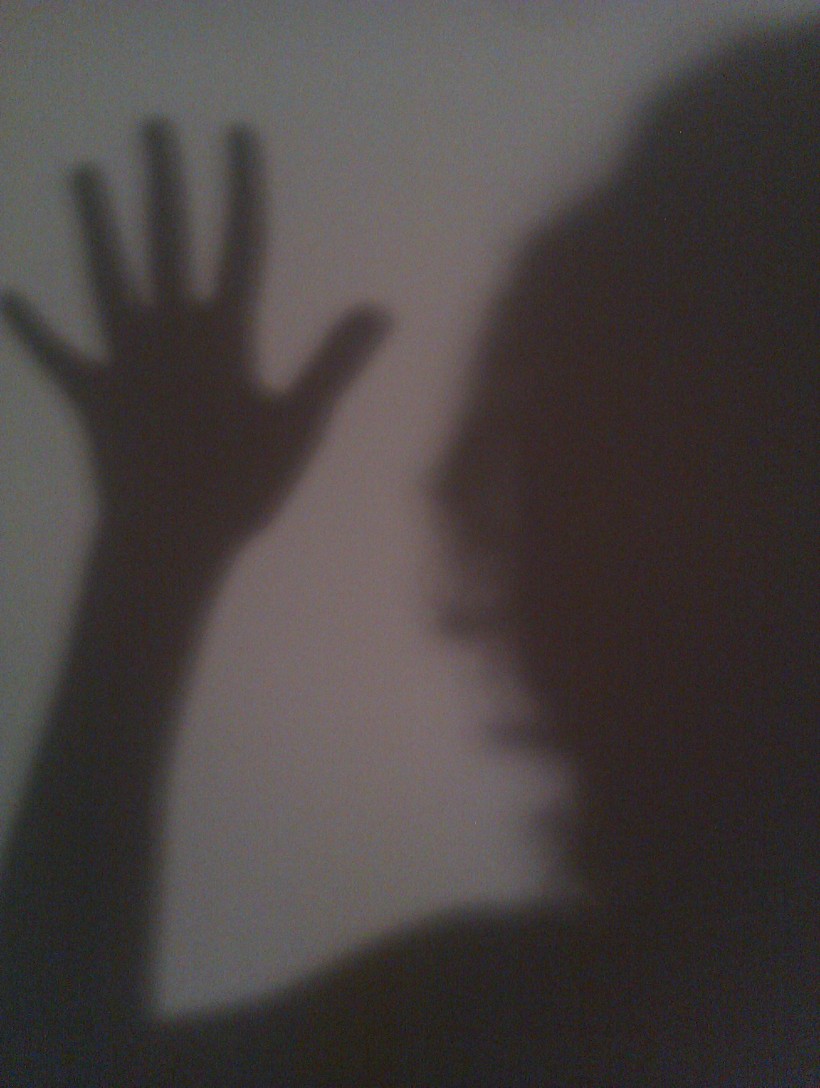 It’s day 7 of the national ‘lockdown’ here in Andalucía, Spain. Life changed overnight as the rise in cases of the Covid-19 virus caused the government to act quickly and announce legislation for new national measures to protect citizens and residents.

Even typing that sentence feels surreal. I’ve lived in Andalucía for nearly seven years and I’m lucky enough to call the city of Córdoba my home; yet, I would never have imagined that I would be sat here, having been sent home from my teaching job with all my books and equipment, waiting with my partner to listen to the President’s speech.

A week earlier, my students had been regaling me with stories about the virus. The teen groups were especially scandalous and no sooner would they sit down in the classroom than they’d all want to start talking about the latest news they’d read or heard. They were excited, something was happening somewhere and they’d all had new mobile for Christmas so now they could follow the news; but at that point it was still far away enough for it to be the kind of threat they were so used to seeing in films and series, one that wouldn’t touch them. How did we all get so naive?  A capitalist system of growth, growth, sell, sell, pushes us all on and gives this false idea that if we all have things, if we all have work, if we can all have all the conveniences that we desire, if we are all productive and striving then – what could touch us? Now we have the answer.

And we are all at once so human that we are forced to recognise our fragility and for most of us this is terrifying.

The mood here in Spain is one of social responsibility, #quedateencasa was quick to appear on social networks. The President talked of solidarity, unity and collaboration. There is a large police and military resource here to enforce the new legislations should it be needed, although generally people are scared and seem happy enough to be at home if they can (People who aren’t able to work at home and frontline workers are still going to work) I’m very ‘happy’ to be at home and lucky to be able to continue teaching online for the moment at least. No one knows where this crisis will lead us but there is a definite mood here which is – we’re all in it together – and that is reassuring.

We’re all learning things each day as the quarantine continues; whether it’s how to navigate your family relationships, hearing birds in the city for the first time or deciding what is the difference between needing and wanting something. There are lots of online posts about the earth needing this break, Venice’s canals are running clear, people are finding time to switch off and reconnect. We use stories to make meaning and we need some meaning right now.

I thought I’d start this blog series #notesfromapandemic to reflect on being here in a flat in Córdoba with my partner and two cats in the middle of a pandemic; of being scared and yet at the same time having normality and more quiet time; and all the thoughts and feelings that this throws up. I’d love for it to become a conversation with other people about what we are all feeling and thinking; what we are afraid of and how we’re dealing with it; what’s different and what’s the same and what this means on a human level for us all.  If you feel like talking  – leave a comment – write a response – what we have at the moment is connection.

Wishing you all good health, 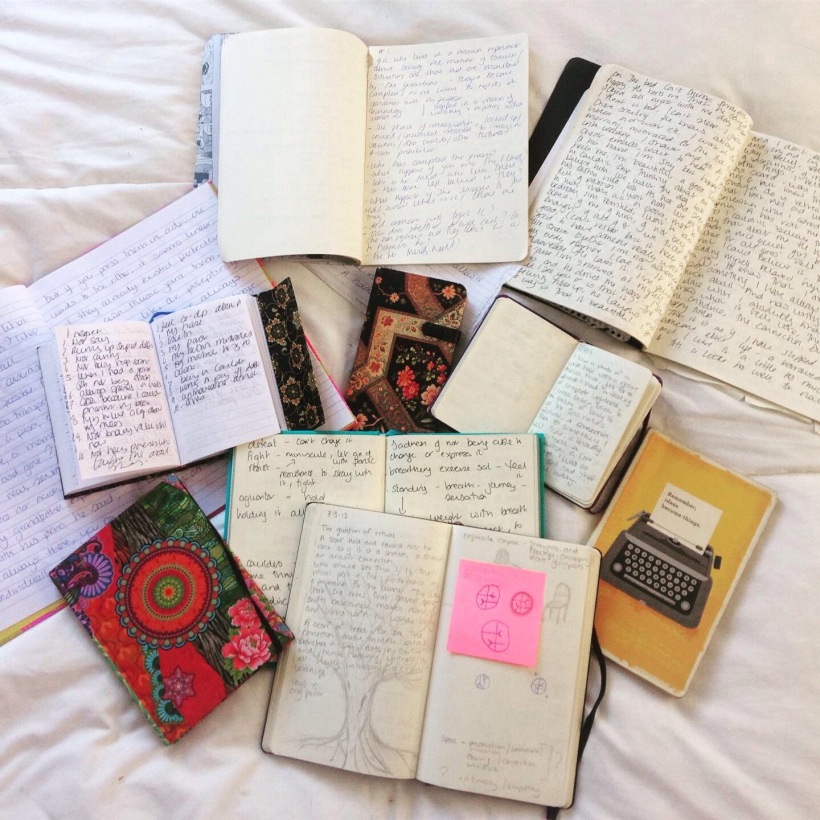 These are my notebooks, if the building was burning I’d go back for them, they are years of pouring heart out onto pages, ideas, reflections, sketches, poems and writing. I return to them regularly, it’s a beautiful act of time travel to go back into your head before you knew what you know now.

I love reading them they are raw and inspired, honest, sometimes uncomfortable but always great tools for reflection, and the purest memories of feelings, sensations and moments that needed to be written. I’ve only every thrown one away… into the fire, an act of spiritual exorcism at the time, the first part of a chronicle of a mad, passionate and unhealthy love affair that nearly took me out, I’ve got the second part, and often wish I could re-read the first. Not for the memories, I’ve got those to work with but for the words, the choice of the words is everything, the shape of them, the way they were thrown onto the page, exhaled or bleeding, the form they naturally took, line breaks, space the gaps between things happening.

I couldn’t sleep last night so I got these out looking for a specific poem that I wrote and used to perform at readings, I didn’t find it but got lost in another dream of things written when life was all sea walks, music and night fires. I wrote another one looking from here to there and knowing a lot more, a blank page was filled, a little more expressed, and I found one, a recent one about dreaming of rain and I breathed some space into it on the pages. It feels full of something, a notion that’ll come clear reading it back years later, and so I write my truths, and for that life is good today.